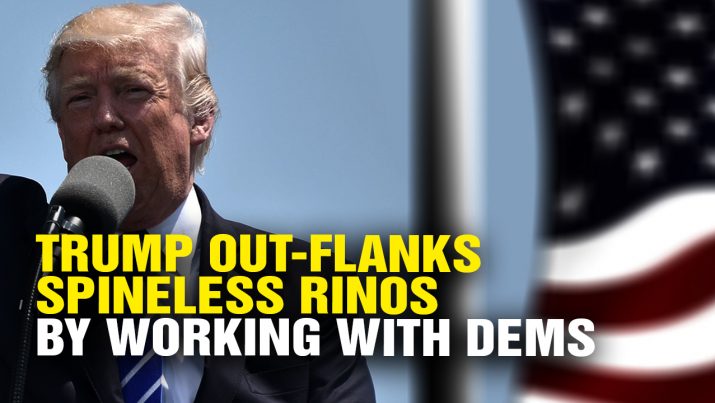 Donald Trump just fired a warning shot over the bow of the clueless, spineless Republican establishment: If you don’t work with me, I’ll go the Democrats.

Podcast Transcript: “Welcome to the Trump News podcast. Everybody’s freaking out now, because Donald Trump is apparently doing a deal with the Democrats over DACA and not building a wall. So, all of a sudden people on the right are totally freaking out. Ann Coulter is like everybody wants Trump impeached now – maybe including her – I don’t know. Didn’t she write “E Pluribus Awesome!” the book about Trump? In any case, the Right is freaking out that Trump did a deal with Pelosi and the Democrats. Now I’m laughing my ass off on this. Why? Because Conservatives, well Rinos – Right Republicans in name only – Rinos refused to work with Trump. Refused to do anything with Trump. Wouldn’t repeal Obamacare even when they ran on it and promised to repeal it time after time… Didn’t they pass like twenty-something bills to repeal Obamacare when Obama was the president. Now they’re not interested anymore? Nothing gets passed by the Republicans, because they don’t want to give Donald Trump credit for anything. They want to make sure that Donald Trump comes out a loser – no matter what…” Listen to the full podcast below:

Trump out-flanks spineless RINOs by working with Dems from NaturalNews on Vimeo.