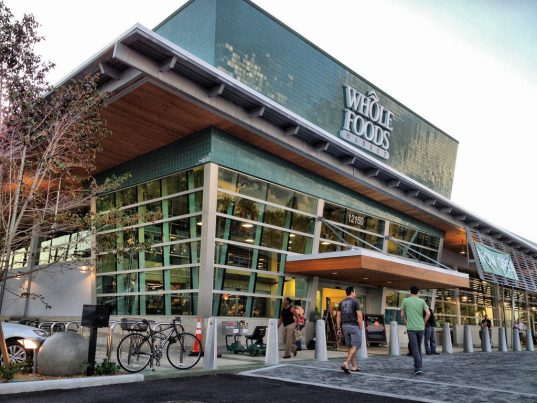 Amazon will acquire Whole Foods Market for $42 a share in a deal with a total value of $13.7 billion, according to multiple news reports (including CNBC), creating the world’s largest marketplace for untested health products contaminated with heavy metals and pesticides.

Neither Whole Foods nor Amazon tests every product it sells for heavy metals or pesticides. Both retailers rely on product providers to meet all USDA and FDA product safety requirements, but product manufacturers routinely misrepresent their own products for the simple reason that they almost never conduct their own testing, either. (Their suppliers lie to them, and in turn they lie to Whole Foods, and Whole Foods accepts that chain of lies as “fact” … which is, ironically, the same method by which the Washington Post writes fake news.)

Personally, I would never sell products with lead levels that high. It doesn’t bother Jeff Bezos, however, who apparently has no limit whatsoever on how much toxic lead, cadmium, mercury or arsenic might be contained in the products they sell for profit.

In 2014, I met with a Whole Foods executive at their headquarters in Austin to hand them heavy metals lab data on the contaminated protein products they were selling. Instead of taking action to remove toxic heavy metals from their products, they ignored the problem and swept the problem under the rug. Whole Foods has since continued to act in a highly unethical manner, selling numerous products on their shelves that are contaminated with lead and other heavy metals.

The lack of ethics at Whole Foods, however, makes the company a perfect match for the lack of ethics at Amazon, another greed-driven retailer that also sells contaminated, toxic health products to unwary consumers. (Have you ever read the ingredients on the foods at the Whole Foods buffet? It’s full of GMOs and pesticides…)

Notably, Jeff Bezos, the “Dr. Evil” globalist who purchased Washington Post (i.e. “Bezos’ Blog”) managed to very quickly turn it into a fake news rag that deliberately and maliciously fabricates fake news in an attempt to overthrow America’s constitutional Republic. Under the corruption of Bezos, the Washington Post has invented totally false news stories by citing fabricated “anonymous sources” to smear President Trump at every opportunity.

It only stands to reason that Whole Foods will follow the same path of corruption under Jeff Bezos, where “health foods” will become “fake foods” filled with garbage ingredients and toxic contaminants such as pesticides and lead.

Will Whole Foods even keep its promise to label everything it sells with GMO status by the year 2018? Don’t be surprised if Jeff Bezos withdraws that commitment, given how the Washington Post is in bed with Monsanto, DuPont and every evil manufacturer of GMOs and pesticide chemicals. The Washington Post “science” section reads like a public relations whorehouse for Monsanto.

What’s the solution in all this? Stop shopping at Whole Foods. It’s about to be owned by an evil, unethical, anti-American globalist who loves Monsanto and hates democracy.

Instead, spend your money at local health food stores, local grocers and smaller grocery chains that offer organic and natural products. Don’t hand your money over to an evil globalist who produces fake news and sells contaminated products on a daily basis.

You can also, of course, shop for non-perishable items at the Health Ranger Store, where everything we sell is laboratory tested and verified before we offer it to the public (which is why we often have shortages on many products because we reject a lot of raw materials).

Also, watch for the latest headlines on whole foods at WholeFoods.news.