Your doctor’s diagnosis is wrong 88% of the time, warns the Health Ranger 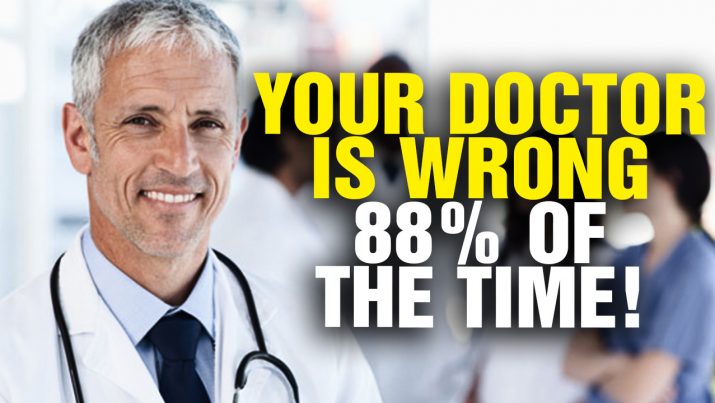 The Health Ranger states in a new YouTube video that doctors misdiagnosis patients 88 percent of the time. It is of utmost importance that patients get a second opinion. Only 12 percent of second opinions align with the first diagnosis. Technically, this doesn’t mean that the first diagnosis is wrong; it just means that two doctors have different opinions. Yet, people should still be cautious.

We give too much credit to doctors when we don’t seek a second opinion. Doctors do not know everything. The Health Ranger says that doctors can’t know what they haven’t learned or been taught. They are trained only to push pharmaceuticals, diagnose conditions, and interpret medical test results. Most doctors rely on memorized material, and they are not holistic thinkers. There are some who branch out and learn about alternative medicines for the absolute care of the sick and needy. Nevertheless, a good percentage of them remain as pushers for big pharma manufacturers.

These doctors are extremely obedient. They do what they are told, which is hilarious considering that they must have their own say on things. Instead, they are easily “taught” by the vaccine industry to introduce poison among people, especially children, through forced vaccination. Most general practitioners nowadays are “glorified drug pushers,” according to Mike Adams. Basically, they diagnose a set of symptoms then prescribe a drug that is linked to those very symptoms.

Mike Adams is an outspoken consumer health advocate. He is known as the Health Ranger and has been given multiple awards for his amazing investigative science journalism. He is the lab science director of an analytical laboratory known as CWC Labs. Founder and editor of NaturalNews.com, Adams is also a prolific writer, often regarded as “the best health and natural products writer on the scene today.” The Health Ranger’s online store features over 600 products that are laboratory tested. His personal life mission is, “protecting the diversity of life” in the universe. The Health Ranger is also a patent holder for his invention known as “Heavy Metals Defense.” It eliminates lead, cadmium, mercury, and arsenic from the body. Likewise, his invention, known as Cesium Eliminator, was awarded patent no. US9526751 B2. This invention helps remove cesium-137 radionuclides from the body after exposure to nuclear energy or radiation.

Mike Adams points out that doctors, based on the way they practice their profession today, are about to get replaced by “drug-vending machines” and A.I. systems able to conduct diagnoses on the spot. Said simply, the racket of diagnosing a patient and then prescribing a drug will not require humans anymore. Adams says doctors will have no relevance as soon as they are replaced by robots. The Health Ranger believes doctors are going to be extinct because the dawn of the machines is coming. Robots are far better and more efficient than human doctors.

In general, the Health Ranger advises not to completely trust doctors. There’s an 88 percent chance that the first diagnosis will be contradicted by a second physician, so always seek a second opinion, particularly from naturopathic doctors. These wellness experts do not work for the big pharma industry and they aren’t “professional drug pushers.” They know the proper diagnosis and they actually care for their patients’ overall health.